Have you ever wanted to be transported back to Medieval times and play bows & arrows?

Bubble Soccer World has more than one string to its bow - Welcome to Combat Archery!

Taking you back to the Medieval age where Bows & Arrows were used as a form of combat. Well now at Bubble Soccer World you can re-create these epic medieval battles in a safe and controlled environment.

Check out the list of our Combat Archery games:

The group is split into two separate teams with each player getting 2 arrows. Each team starts from a designated base set by the event coordinator . Both teams have to navigate their way around obstacles avoiding enemy fire. If you get struck by the opposite teams arrows then you must drop your arrows where you stand and retreat back to your base to re-spawn.

Similar to the rules of dodgeball, with a twist. Both teams begin at opposing ends of the field of play and race to the middle to collect as many arrows as possible from the buffer zone. You cannot cross over onto the opposing teams side. Once each player has collected arrows they must retreat back to your side and prepare to destroy the other team. The goal is to strike the opposing teams players in order to eliminate them, once hit you are eliminated. However, your team mates can bring you back in to play if they can catch one of the opposing teams arrows mid flight.

Time to test your relfexes with a game of Arrow Catch! The game starts off with all players standing in a line and one player (The Shooter) standing opposite them in the middle of the pitch with a bow and arrows. The objective for the shooter is to fire the arrows and hit as many players as they can. The objective of the remaining players is to try and catch the arrows mid flight. Should they catch an arrow then they will become a "Shooter" and join the middle. This continues until there is only one player left standing.

Similar to the rules of Arrow Dodge...Only this time, if you're hit, you're out! Aim of the game is to eliminate all of the opposing team by striking them with arrows. If there are still players in the game after 10 minutes then the team with the most active players wins.

Loot rush is a game of tactics and skill. The aim of the game is for each team to retrieve as much loot as they can (bibs, cones etc). Players must run onto the field whilst under enemy fire from the opposing team and try to collect as much loot as possible to return it to your base (1 base per team). If you are hit by an arrow then you must drop what's in your hands and return to your base to re-spawn. Protect your loot from the opposing team at all costs! The team with the most loot wins!

I'm sure your imagination can work this one out! The stag/hen runs from one end of the field of play to the other avoiding as many arrows as they can being fired from the rest of the group.

Each team is allocated a base with a cone/flag placed on top of it. The aim of this game is to retrieve the opposing teams flag/cone from their base and bring it back to your own without being hit. If you take a hit whilst in possession of the cone/flag then you must drop it where you stand and make your way back to your base in order to re-spawn. 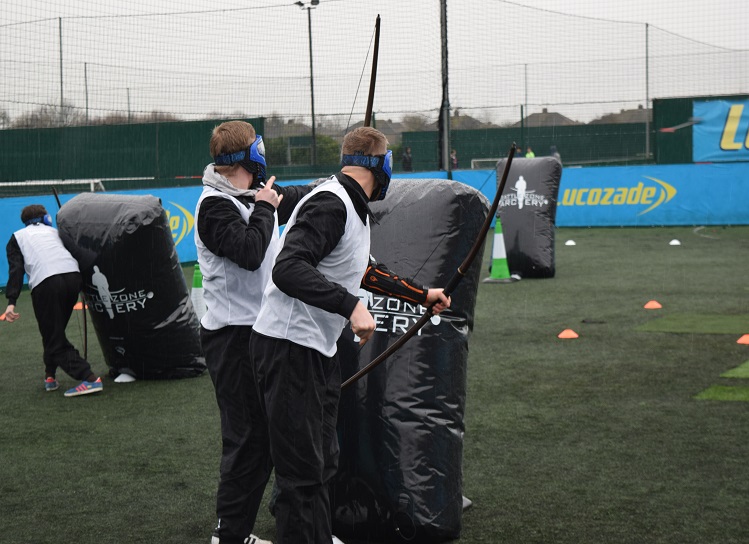 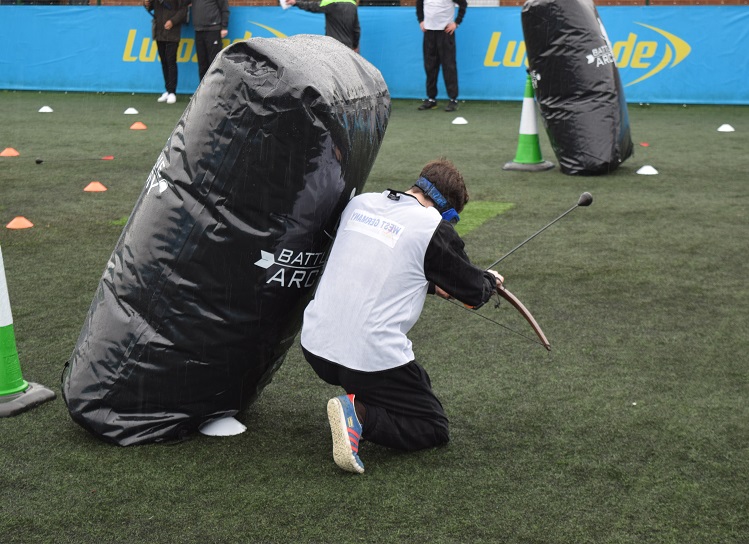 All our Combat Archery events are professionally organised and packed with fun & laughter from start to finish ensuring that your special event is one to remember.