Bringing a whole new meaning to the phrase "Beer Goggles"

Goggle Football is our brand new revolutionary and ridiculously funny game that brings a whole new meaning to the term "BEER GOGGLES".

Goggle Football aka Binocular Football consists of 10 players wearing our uniquely designed googles whilst playing a game of 5-aside football. The goggles are specially designed to distort and impair your field of vision giving the illusion that football is a much further distance away or closer to you than it actually is! Be prepared for fresh air kicks and maximum hilarity!

We also host a variety of "Game in Games" as well as the traditional game of 5-A-Sides:

The group is split into 2 separate teams who work together in order to race around the circuits set out by the event coordinator as fast as they can. The first team to complete the full circuit wins.

In the game of Keep Ball selected players form a circle around 1 or 2 of the other players who are wearing goggles. The players forming the circle and not wearing goggles have 1 football between them. The object of this game is to keep possession of the ball whilst passing it between the outer circle of players without the players wearing the goggles winning the ball.

A normal game of penalty shootout with a twist. The player taking the penalty will be wearing the specially designed goggles, but before they take their shot they must spin around on the spot 5 times! The object of the game is to beat the keeper and score.

Aim of the game is for all players to line up across the pitch and take a shot each of striking the football off the crossbar...traditional old school game with added twist of wearing the goggles. Much harder than it sounds!

The group is split into two separate teams with the object of the game being who can score the most goals. First of all the two teams are lined up at opposite ends of the pitch. One at a time the players must run to the halfway line and round a placed cone, then turn back facing towards their goal. A team mate will then pass a ball to them and the player must strike the ball and try to score. This format continues until all players have had a shot at goal. 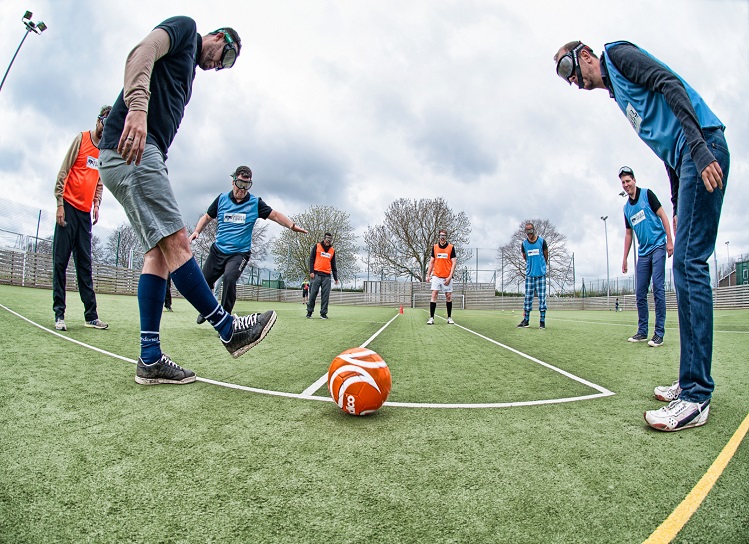 All our Google Football events are professionally organised and packed with fun & laughter from start to finish ensuring that your special event is one to remember.